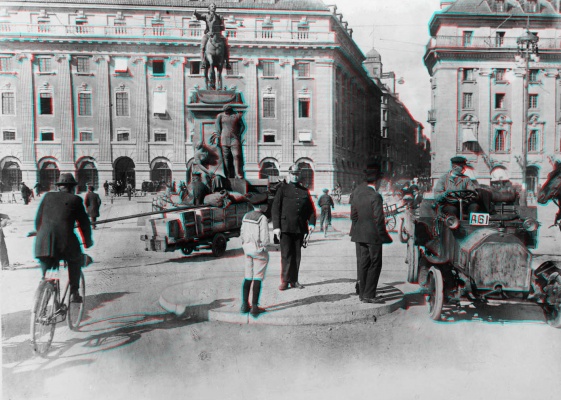 In Stockholm
, and  others
Vladimir Lenin

The most important thing is that we come to Russia as soon as possible. Every day counts. The government has tried everything to complicate the trip.

Probably the respectable appearance of reputable Swedish comrades has made us wish that Ilyich looked like a person. We were trying to persuade him to at least buy new boots. He left in highlander boots with huge nails.
We pointed out to him that if it was all right to spoil with these boots the sidewalks of vulgar towns of bourgeois Switzerland, then conscience should prohibit him to go to Petrograd with these instruments of destruction, where maybe there are no more sidewalks. I went with Ilyich to a Stockholm department store, accompanied by a Jewish worker, Khavin, who was knowledgeable about local customs. We bought Ilyich boots and began to tempt him with other wardrobe items. He defended himself as he could, asking us if we thought that he was planning to open a clothing shop upon his return to Petrograd, but we managed to persuade him and outfitted him with a pair of trousers, which I, having arrived to Piter in October, found him wearing, despite the rather formless appearance they have acquired under the influence of the Russian revolution.

How pleasant was this day with Lenin! In his presence a person came to life and felt a rush of fresh strength and special energy. I yearned to go Petersburg with him. But the leader told me to stay, and I had to obey…

This situation cannot continue indefinitely. The Revolution is deepening. From political questions they will transition into social. We, though, need to bide our time until the circumstances reveal the emptiness of the provisional government, and to be ready when events will take shape.

You write that my favourite cat that lived with you has died. A pity. And why do cats die so easily? After all, you cared for her so much. So do you not have a cat at all right now? My Mimi feels well. I would very much like her to be brought here, but I’m afraid that a rail journey would be too much of a shock for her.

Mass demonstration of the Women's Land Army in London.

I came to ask you to let us leave Russia: me, Grand Duke Pavel and our children.

, and  others
Alexander Kerensky

To leave? For where?

It was a very nice sunny day. I took a walk with Tatiana until 11 o'clock. At 2 o'clock the shrouds were carried out.1361 walked and worked near the ferry. At 6:30 I went to services. In the evening I confessed to 0. Belyaev. I forgot to mention that yesterday we said goodbye to 46 of our employees, who finally were released from Alexander's Palace to their families in Petrograd. The weather was fine, with a strong south wind. At 9 o'clock we went to Mass and received the Eucharist, the greatest of Christian mysteries, with the rest of the people. I took a walk until breakfast. During the day the ice began to break up near the bridge. I walked with friends and Tatiana. I slept for a while until dinner. We gave presents to each other, eggs and photographs. At 11:30 we went to the Midnight Easter Service.

Jews in America are asked by the promoters of a fund started yesterday to present to the free people of Russia a copy of the Statue of Liberty. The idea originated with Herman Bernstein, editor of The American Hebrew. Mr. Bernstein said last night that Jacob H. Schiff had consented to be the temporary treasurer of the the fund, and that he had received $500 from D. Lvovitch of New York as the first contribution.

What sort of man was Lenin? An old comrade gives his opinion
Premiere of the Ballets Russes in Rome
“Profiteering from the revolution is taking place on a massive scale”