Roudneff, the Mayor of Moscow, Goltz, who belongs to the left wing of the social revolutionaries, and the Mayor of Petrograd, sent me a message the other day saying that they wanted to see me and suggesting that I should meet them in the Summer Garden so as not to attract attention.

I declined to give them a clandestine meeting of this kind but said that if they would come to the Embassy I should be happy to see them. Roudneff and Goltz came late this evening, having apparently taken every precaution not to be followed.

It is symptomatic of the times we live in that a Socialist of Goltz' extreme views has to come to the Embassy secretly for fear of being arrested as a counter-revolutionary. They had, they said, come to ask me what would be our attitude were the Constituent Assembly to appeal to us to convert the present nego- tiations for a separate peace into negotiations for a general one. They next inquired whether, if Russia, who could not go on wth the war, were to conclude a separate peace, we could do anything to help her from being forced to accept terms prejudicial to the interests of the Allies. Finally, they wanted to know whether Mr. Lloyd George's statement that we were going to fight out the war to a finish was meant seriously or intended as a bluff for the Germans. I returned non- committal answers to all their questions, and, on my explaining the reasons which forced us to go on with the war, they assured me that the social revolutionaries did not hold us, but the Germans, responsible for its continuation. As they were leaving, Roudneff told me that my chair in the municipal council chamber was always at my disposal as the Moscow Duma was not Bolshevik. I am not, however, tempted to occupy it in present circumstances.

I keep reading about the civil war in the South, and if even half of it is true - it is absolutely horrible. All the situation is terrible and I'm so sick of it!

The materialistic conception of history is all very well, but some care for the higher things of civilization is a relief. The Bolsheviks are sometimes said to have done great things for art, but I could not discover that they had done more than preserve something of what existed before.

Source: Russel B., The Practice and Theory of Bolshevism, 1921 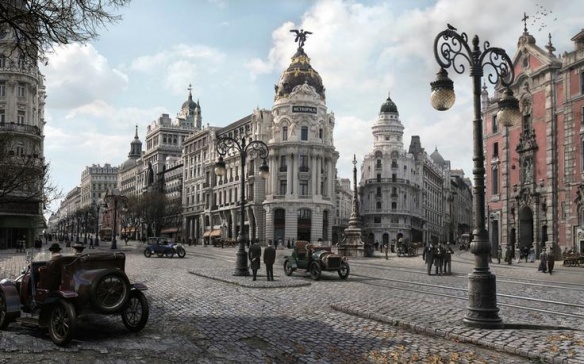 Lunching with some friends one day, I was given some excellent Madeira, and noticed that the bottle came from the Imperial cellar. My hostess’s little boy of five, while playing in the Alexandrovski garden with his nurse, had found two bottles in the snow.

My darling and dear: Thank you tenderly for your little gift. It was so nice to have it, reminding me especially of you. We remember and speak of you often, and in our prayers, we are always together. The little dog you gave is always with us and is very nice. We have arranged our rooms comfortably and all four live together. See more

We often sit in the windows looking at the people passing, and this gives us a distraction... We have acted little plays for amusement. We walk in the garden behind high planks.

God bless you. An.