Project 1917 is a series of events that took place a hundred years ago as described by those involved. It is composed only of diaries, letters, memoirs, newspapers and other documents
Russkaya volya

About a month ago it turned out that some valuables, primarily art, went missing from the state rooms of the Winter Palace. Missing pieces included rare sculptures (bronze), china, cameos etc. Despite all searching effort, perpetrators were nowhere to be found. All Palace staff were under suspicion. Suddenly, police got on the tracks of the robbers in the Pavlovsky college.

As it turned out, several college students have formed a robbers gang. They used their Junker shifts at the Palace to steal valuables from the rooms. Some of the valuables were returned to the court of inquiry - 7 bronze figurines by F. Chopin (1867). They portray Ermak, Vladimir Monomakh, Tsar Fyodor, Wassily V, Boris Godunov and Vladimir the Great.

I received a telegram from Lieutenant-General Nikolai Dukhonin. From September 22, I will be transferred to the reserve because "I didn’t adapt to the current conditions." I have the same opinion about myself and would just like to add that for six months I did not meet the requirements of the time. In other words, from the very first day of what they want to call the democratization of the army, but in fact what should be called its annihilation. I won’t hide it. I’m extremely pleased that this is how I will leave the game, and I don’t care what’s the reason and on whose initiative I was transferred to the reserve. See more

I'll try to get to Finland soon, although it doesn’t seem particularly attractive to me. Judging from the newspapers, Finland is gloomy. The socialists started a dangerous game, getting support for their insatiable demands from the bayonets of the masses of Russian soldiers. If there is another socialist majority in the elections, the future doesn’t promise to be good. I can’t imagine that the amount of grain needed to prevent famine could be imported into Finland. Of course, miracles are possible because Russia is a country of limitless possibilities, but when you see how bad the situation is here in the south, in the most bread-filled regions of the country, it’s hard to imagine the likelihood of such an outcome.

It falls on me to work for the benefit of society, I painted a few paintings, the work on “Supremus” is progressing - both the magazine and the painting. In general, it is very interesting to work. I have a sense that I will succeed in leaving a memory of my days. I want to do a grand lot of things.

How much more wonderful the Orthodox service is than the Protestant service.

Labour days. This evening we are meeting for the first time- the literary commission. Batyushkov explained our situation, then we three remained (Morozov, myself and Piksanov). Morozov recited the contents of eight plays. We conversed then parted ways, having received four plays and a stack of tickets to the Alexandrinsky and Makhailovsky theatre for the whole season. 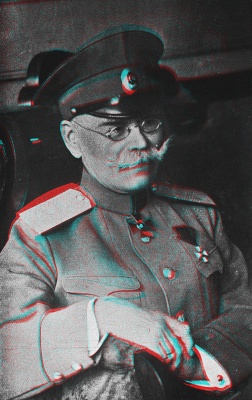 Dear Mr Professor, I imagine that you have been been back from Vienna for a few weeks now. A young doctor has recently begun working in my clinic who expresses a great interest in psychoanalysis. To my great delight I have learnt that there are many young doctors who are interested in our work, and that those with a keen interest in psychiatry are applying to work at my clinic. The third part of your lectures is simply wonderful. I think it is the best possible introductory course for our new adepts (although I think those already familiar with the subject will take more from the “lectures” than newcomers).

From the first of September all museums in the capital will be closed for visitors. In accordance with directions from the Provisional Government, the most highly treasured museum artifacts are to be packed and removed from the city. Paintings are already being taken down, reframed and packed into special containers in the Museum of Alexander III. Where exactly the museum will be evacuated to is currently unknown. Preparations are being overseen by departmental heads.

Permanent sobriety: vodka is being destroyed in Russia
Women's Death Battalion is about to be dissolved
"Thus these young men of culture and education trembled before the country louts whom they had under their command"